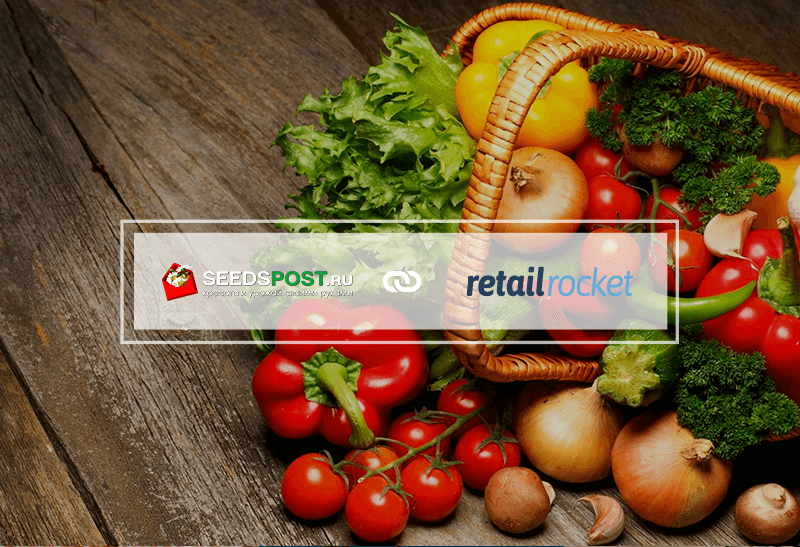 Every A/B test performed for Retail Rocket customers is unique in its own way: different hypotheses, test conditions and industries. The more unusual the industry is, the more interesting it is to work on. We all have been getting used to ordering clothes and appliances in online stores already for some time, but what about seeds? In today’s article, we will go through the test results of the trigger-based emails of Seedspost home and garden online store.

How to optimize any email template for user’s convenience? How does the placement of the banner affect conversion? Should emoji characters be used in the subject line? The answers to these and other questions were received by our Growth Hackers based on statistics collected through A/B testing mechanics when all recipients of emails are randomly divided into two segments. Segment A received the original version of the email, while segment B  received an alternative email containing a hypothesis, which should improve the effectiveness of e-mailings.

Case 1. Updating the product card design – we focus on the CTA-element

The product card is a key element of the email, so it should be bright, it should contain the necessary information which will move the user towards a purchase decision and it should have a transparent call to action. These changes were guided by conducting a study of the effectiveness of various options on how to process product cards in emails.

For testing, the most popular scenarios of trigger-based emails were selected: “abandoned cart” and “abandoned browsing”. Emails from the first scenario are sent to users who added items to the shopping cart but for some reason did not complete the order. And then emails from the second scenario to users who during the visit to the site viewed specific goods, but did not add anything to the cart and did not make any actions towards a purchase.

Increasing the size of all elements in the product card and changing the CTA-element from a simple inscription to a bright button will increase the number of transitions to the site, by focusing the user’s attention on the product.

More than 13,000 people participated in the A/B test, and the following data was gathered:

Statistical significance: 99.9% for both CTOR and CTR.

According to the results of the A/B test, “abandoned cart” emails did increase CTR by 64.8%, while “abandoned browsing” emails had a 13.3 % increase.

UX-design is a complex approach to user interaction with email interface. If the template is overloaded with details or not focussing on useful information, the likelihood of user conversion will be significantly reduced. Therefore, you will need to constantly compare the effectiveness of different design options.

The hypothesis of updating the template design was tested not only on “abandoned cart” and “abandoned view” scenarios but also on a special Retail Rocket “predictive” scenario:  “Next Best Offer”.

The increase in the number of clickable elements will ensure the growth of CTOR and CTR. The updated interface will allow the user to find more easily the products of interest, and adding text to the email with discounts and gifts will attract those users who are not interested in goods from the recommendation block.

During the testing period, the following results were gathered:

Statistical significance: 99.9% for both CTOR and CTR.

Case 3. The influence of a banner’s location in an email on key indicators.

Not all users who open an email will entirely view it. So we decided to check how the location of the blocks in the email affects user’s decision to buy. For this purpose, an alternative banner layout was tested in the “abandoned cart” email.

On one side, the location of the banner in the email’s footer reduces the likelihood of the users to view it, since the goods in the cart objectively represent a greater interest for them. And on the other side, it cannibalizes some of the clicks on the product recommendations block. Therefore, by changing the banner to the email header, above the cart products block, will increase the users’ attention among all the blocks and increase the likelihood of conversion.

Case 4. The introduction of the element “LEFT IN STOCK” in product cards – operating the “deficit” trigger.

Users often have a lack of confidence to make a purchase, and they need to slightly be pushed towards the goal. The “product view” email templates are sent to users who viewed specific products during the visit to the site but did not perform any actions towards conversion. As an additional incentive to buy, the element on the product card “Left in stock” was tested, showing the remaining quantity of each product in the email.

Adding the item “Left in stock” to the product cards will increase the user’s interest in the immediate purchase, since showing the remaining goods will create a sense of scarcity and urgency.

The testing involved more than 23.000 people and the following results were gathered:

Therefore, the combination of creating greater value by pointing out a possible shortage of goods, on one hand, and a social test in the form of popularity, on the other hand, allowed to increase the conversion rate by 33.8%.

Case 5. Use of the emoji symbol in the subject of the email.

In “abandoned browsing category” trigger-based emails, the popular products are sent to the user from categories in which the user showed interest (even before opening product cards or buying anything). In this case, the user still does not have a clear interest in buying. So the main task of the online store at this stage is to still motivate the user with insignificant elements such as emoji symbols.

The use of emoji symbols in emails will increase the level of trust, and our A/B test will confirm that this approach works. If the symbol fits the logo or assortment of the store, it creates a certain mood and accentuates user’s attention. For Seedspost the images of seeds in the email subject perfectly match.

It is expected that any change in the subject line will affect the number of emails opened, but in this case, we saw a +10.2% increase in the number of unique clicks.

The reason is that the emotional characteristics of goods are no less important for the modern consumer than the rational ones. People are used to using emoji symbols in interpersonal communication, so they tend to perceive emails with their use as more “friendly”, which explains the growth of CTR.

I experienced many different emotions: joy, delight, surprise, excitement, when we conducted the first A/B test and a simple replacement of the text “Have a look” in the CTA-element with a bright “Have a look” button increased the CTR for the “abandoned cart” by 64.8% and “abandoned viewing” by 13.3%. After that, you understand that e-mailing has many nuances that can increase its effectiveness, and it should only be entrusted to professionals. All tests that were conducted by Retail Rocket showed a qualitative increase in performance.

Until the date, trigger-based emails are a powerful sales channel, but they cause different emotions for the user, as he receives emails not only from us, but from completely different companies, so it is difficult to predict the effectiveness of an email. Therefore, I consider it necessary to continue to experiment in this area, since this is a very “lively” process, in which changes will constantly occur. And do never stop testing!.

Website personalization technology and triggered emails are now available to everyone!

This website uses cookies to improve your experience while you navigate through the website. Out of these, the cookies that are categorized as necessary are stored on your browser as they are essential for the working of basic functionalities of the website. We also use third-party cookies that help us analyze and understand how you use this website. These cookies will be stored in your browser only with your consent. You also have the option to opt-out of these cookies. But opting out of some of these cookies may affect your browsing experience.
Necessary Always Enabled